Dean and Julie were the winners of the Solo/Duo category at the Cascade Blues Association’s Journey To Memphis competition. They are honored to represent the CBA at the International Blues Challenge in Memphis Jan 16-20 2018.

If you would like to contribute to the journey a GoFundMe page has been setup to help with expenses. We certainly appreciate your help! 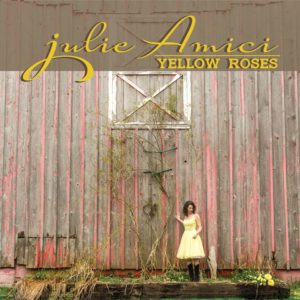 This debut EP from Julie Amici covers a good selection of Americana. It is all original material save for the inclusion of the traditional old English folk standard “The Fox.” And though this may seem like a completely different musical approach than you would expect from Dean Mueller and Julie Amici, a distance from their normal blues and jazz format, it is a beautiful accomplishment that showcases the diversity of their range and capabilities.

Julie has one of those voices that draws you into the music immediately. Noted for her expertise capturing the emotion and sensuality of bygone artists like Dinah Washington, Nina Simone or Patsy Cline. She crosses the lines of the various genres from blues, country and jazz with perfection. But here she has found a true calling with folk and roots music. It is a direction suited ideally matching the atmosphere behind her songwriting and vocal talents.

Though this is only an EP, with a meager six songs in total, it is crafted brilliantly with instrumentation and flow.  As explained in the liner notes, these are stories that recall Julie’s upbringing and dreams. Each has its own personality and flavor, completely enhanced by the musicians accompanying her. All are outstanding with my own favorites perhaps being “Put You Down,” “Lady Of The Mountain” and especially “Black-Eyed Susan.” But they’re all winning numbers.

The Yellow Roses project was six months in the making, working with good friend and collaborator Alan Jones at the helm. Instrumentation aside from Dean Mueller on bass and guitar and Alan Jones on guitar, percussion and background vocals the disc includes members of Timberbound, Gavin Duffy on banjo and mandolin and Jenny Estrin on violin; the award winning guitarist Alan Hager; and Duffy Bishop and Chris Carlson on background vocals whom Mueller works with in the Duffy Bishop Band.

The only downside I found with Yellow Roses? It’s just not long enough. It has left me wanting more. And that is a good thing as it leaves an anticipation for what they come up with next. Can’t wait!

Yellow Roses is the long awaited debut recording of Julie Amici and Dean Mueller, a popular jazz/roots duo from Portland, OR. and it opens a door for them as they explore a new direction, creating music that crosses over into the americana/folk realm.

Our New EP: Julie Amici “Yellow Roses” is Available! If you would like a signed copy of the CD, please message us directly and we can make arrangements to send you one!

Here are all the links you need to explore this new release:

Check out the Yellow Roses Music Video  – please view, give it a thumbs up, and leave a comment.
Listen to all the songs and check out the line notes
Order a CD, or download songs
Find it on ITunes
Please like our facebook page
We hope you love it!

Dean and Julie were the winners of the Solo/Duo category at the Cascade Blues Association’s Journey To Memphis competition. The competition took place at Vinyl Tap on June 3rd 2017 to earn the honor to represent the CBA at the International Blues Challenge in Memphis Jan 16-20 2018.

We are beyond excited to announce that Julie Amici will be celebrating the release of the new Yellow Roses EP on May 29th at Lake Theater & Cafe. The project is the result of a 6-month collaboration between Julie Amici, Dean Mueller and their producer Alan Jones. The release party will feature Timberbound as the opening act, followed by performances of the songs written for the EP.

In the last couple of years, Julie Amici has been nominated for the “Best New Act” and “Best Traditional Act” CBA’s Muddy Award’s. The Yellow Roses EP is a significant departure from the jazz and blues vibe that Dean & Julie are most noted for and takes a significant turn in the America direction with all original compositions. To help with the recording, they enlisted one of their regular guitar players, Alan Hager, from the Curtis Salgado Band, keeping continuity with their blues past. To move in the acoustic/Americana direction, they enlisted the help of Gavin Duffy on banjo and mandolin and Jenny Estrin on violin. Gavin and Jenny are both members of Timberbound, a regional folk act lead by Joe Seamons.

Timberbound will be kicking off the party with a set featuring its own renditions of folk songs, taking the audience on a tour of old sawmills, logger’s cabins, and fisheries of the Pacific Northwest. The debut viewing of the “Yellow Roses” video will start the second set. The TImberbound cast will then be joining Julie Amici, Dean Mueller, Alan Hager, and Alan Jones for a stirring live rendition of the Yellow Roses EP. We hope you will join us!

The Music Monday series features top jazz, blues and roots artists from throughout the region. Originally built in 1940, the recently restored Lakeside Theater and Café is a state-of-the art concert facility, with a beautiful lakeside view and a full-service bar and restaurant. This event is all-ages and showtime is 7:00pm, doors open at 6:00pm. A Sellout it expected so advanced purchase is recommended. Tickets are $15.00 for general admission ($80 for a reserved VIP table up front) and can be purchased online at https://laketheatercafe-com.seatengine.com/

Two of the Northwest’s most renowned female singers, Mary Cameron and Julie Amici, will join forces to perform a musical tribute to the great country artists Loretta Lynn and Patsy Cline. The talented Portland area vocalists have been performing their own tribute shows regularly to sold-out houses throughout Oregon and Washington. They are taking their combined show on the road to visit various theaters in the region and their first such performance will be March 31st at the North Coast Recreation District Performing Arts Center in Nehalem, Oregon.

Julie Amici has recently been nominated “Best New Act” and “Best Traditional Act” by the Cascade Blues Association. She performs with Dean Mueller regularly in Portland with The Julie Amici Band. Julie brings an intimate and alluringly sweet voice that melds jazz, blues, and country. With the Patsy Cline tribute, Julie returns to her childhood roots in country music and delivers expertly.

Mary Cameron has spent many years honing her craft around the Portland music scene. She can be seen regularly singing classic country and western songs with her band at nightclubs and events around the Northwest. Cameron is well known for her knack of picking great unknown songs from the repertoires of many country music artists, a skill that serves her well in her tribute to Loretta Lynn titled Hey-Loretta! Lynn wrote many of her own songs and has been hailed by critics as the undisputed Queen of Country Music throughout her five decade career.

The backing band is made up of a cadre of award winning musicians including drummer and Oregon Music Hall of Fame inductee Carlton Jackson; national Blues Music Award nominee bassist Dean Mueller and renowned jazz guitarist Dan Gildea. The group will be joined by former Nashville touring pro Gary Thorsen on pedal steel, one of the most versatile musicians on the Portland country music scene.

The combination of these two lovely voices and seasoned musicians make for an inspired performance sure to bring back warm memories of classic tunes made popular by Patsy Cline and Loretta Lynn, who were best friends prior to Cline’s untimely death in 1963. Audiences will be treated to a tasteful musical journey that will include a history of Loretta and Patsy’s hits.

Julie Amici & Dean Mueller were the subjects of an extensive LO Review article in the “Neighbors”  section November 25th, 2016. It talks about their history and their musical contributions to the Lake Oswego community. You can Read The Article Here.

We have started an Indiegogo campaign, please have a look here and thanks for your support!

Julie Amici has been nominated for a “Best Traditional Act” 2016 Muddy Award. Voting is from Oct 2nd through Oct 16th at the Cascade Blues Association website. This nomination follows on the heals of last year’s “Best New Act” nomination.

The new single by Julie Amici entitled “Yellow Roses” is now available on ITunes, Amazon, Google Play, and over 15 other online locations. The world needs this music now, please check it out here and share.

Join us at the annual Lange Winery Springtime Soiree, the Julie Amici Trio with Alan Hager, will be performing from 11:30am til 3:30pm

Julie Amici is please to bring their popular “Patsy Cline Tribute” to The Willamette View as part of the Fly Me To The Moon program. This concert is offered by the "Music Works" program in the Blue Heron Auditorium.
https://www.wvresident.org/resident_portal/wv_rp_music_works.php

Julie Amici & Friends performs for One Night Only, a benefit for NKNE students.....